WATCH: Hayden Williams slams UC-Berkeley admin. 'for allowing it to get to this point' 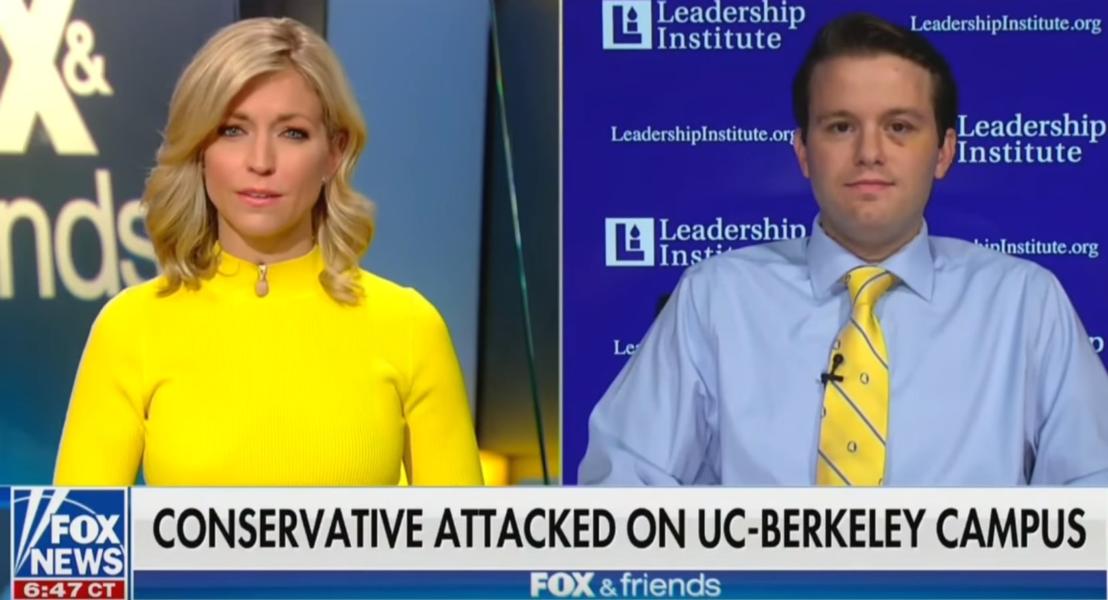 Leadership Institute Field Representative Hayden Williams advocated Wednesday for due process in the case against his attacker on the University of California-Berkeley campus while slamming the college administration for allowing things to this point in the first place.

"My main critique is with the administration for allowing it to get to this point where this sort of violence is accepted and even encouraged by some."

On Fox & Friends, Williams was asked by host Ainsley Earhardt the identity of the man who was caught on video punching him in the face while he helped conservative campus groups recruit new members. Police in California told Campus Reform recently that they have identified the suspect but have not released his name publicly. In the latest development Tuesday night, which Campus Reform reported exclusively, a spokesman for UC-Berkeley said that police are seeking a felony arrest warrant from the Alameda County District Attorney's Office.

Campus Reform reached out to the DA's office Tuesday night but the office said it did not have a comment at the time.

[RELATED: EXCLUSIVE: Update on assault against conservative at UC-Berkeley]

"I don’t know all the details. You know, it’s still under investigation," Williams said Wednesday on Fox & Friends.

"But what I do know is that there is a culture at Berkeley that sort of harbors this mentality. It’s embedded at the university and you know, some people of the campus community were even hailing this guy as a hero for what he did and encouraging members of the community not to snitch on this individual," Williams said.

"What do you want to happen to him?" Earhardt asked Williams, referring to the man who punched him in the face.

"Well, I respect due process and, you know, I’m confident that he will be found. The police are doing good work on this case. And my main critique is with the administration for allowing it to get to this point where this sort of violence is accepted and even encouraged by some," Williams said.

Story continues below the video...

It's by no means the first time a conservative has been attacked at Berkeley. In 2017, riots broke out across the campus over appearances by conservative commentators. One man was even charged that same year for smashing someone upside the head using a bike lock. In a separate incident, also in 2017, a supporter of President Donald Trump was pepper sprayed in the face.

Dan Mogulof, assistant vice chancellor for the Office of Communications and Public Affairs for UC-Berkeley, told Campus Reform in response to the most recent incident of violence involving Williams, “let me state in no uncertain terms that this university strongly condemns violence and harassment of any sort, for any reason. That sort of behavior is reprehensible and intolerable.

"We have, in recent years, spent millions of dollars to ensure that students from across the ideological/political spectrum can safely and successfully promote and discuss their beliefs. Our commitment to freedom of expression and belief is unwavering," Mogulof said.

After initial publication of this article, Mogulof provided the following further statement to Campus Reform:

but maybe someone should ask those pointing accusing fingers how they believe a University—not to mention every town,city, county, and state in this country—would be able to prevent a lone idiot, who is neither employee or student, from doing idiotic things on a campus spanning 1200 acres and a population of $50,000 people. We dont see a way to do that, but that doesn’t mean our cops and the administration  dont wake every morning trying their best to deter criminal behavior. Part of that comes from imposing appropriate consequences and we will do everything in our power to make sure that happens