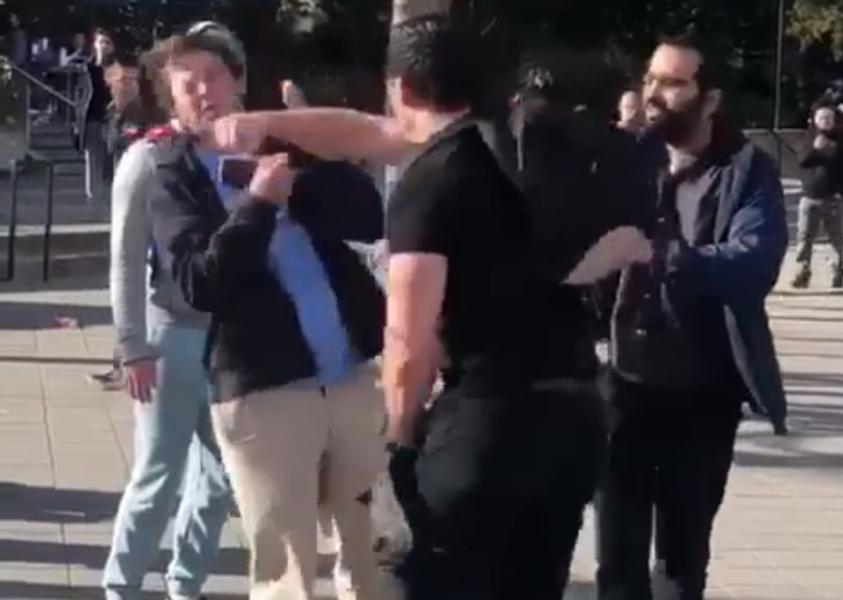 On Feb. 19, a conservative was punched in the face at the University of California-Berkeley while tabling for Turning Point USA.

UC-Berkeley has a history of violent protests and administrative targeting of conservative students; however, this is an issue that spans all across the United States and receives nowhere near the attention that Hayden Williams, who works for Campus Reform’s parent organization the Leadership Institute, received.

This type of violence against conservatives does not just happen at UC-Berkeley.

Conservative students at hundreds of colleges across America experience similar situations to what happened to Williams and other conservatives on the campus of UC-Berkeley. This type of violence against conservatives does not just happen at UC-Berkeley.

My friend, Joel Valdez, and I experienced a similar situation as Williams nearly a year and a half ago. A graduate instructor and an antifascist activist at the University of Illinois, Tariq Khan, assaulted Joel Valdez and me. Khan interpreted Valdez saying, “don’t you have anything better to do? Don’t you have kids?” as a “threat” to his children and charged both of us.

Unlike Williams’ attacker, who was charged with three felonies, Tariq was never charged for assault or battery and eventually had his criminal damage to property charge dropped in a second chance program.

The aftermath of the incident is shocking. Instead of the University of Illinois treating us as victims of an assault on their property, administrators responded in a way that feels like they retaliated against us.

The University of Illinois told Andrew Minik, the author of the original Campus Reform article, that if he wanted the situation to improve, he should stop writing articles about Khan.

The exemptions to the no-contact orders seemed to change every meeting we had with the dean.

We were originally told that the order did not apply in public places and that this would not affect our ability to report on incidents on campus, especially incidents relating to Khan.

Turns out this was not true at all.

After filming a protest on Feb. 22, 2018, I received an email from the dean that stated I had allegedly violated the order. I had never spoken to Khan at the event and it was at a public place, the State Farm Center, where the men’s basketball team plays home games.

The dean had told me that filming Khan was a violation of the order, even in a public place. I never directly filmed Khan in the footage; he happened to be in the background. Knowing this, Khan then claimed that I had filmed him even when I did not even encounter him.

After a hearing was scheduled for formal disciplinary charges, we filed a federal lawsuit against the University of Illinois, which is still ongoing.

[RELATED: Conservative lawsuit against U of I proceeds to federal court]

The decision by the university to implement a no-contact order has forced me to stop attending protests and reporting in fear of being dismissed from the university. I have not attended a protest since the lawsuit was filed. Every day, when I walk around campus, I fear to encounter Khan.

Valdez and I have experienced what Hayden Williams had experienced. This stuff does not happen exclusively at UC-Berkeley. It happens all over America, and many more college conservatives share similar stories to what we have experienced.