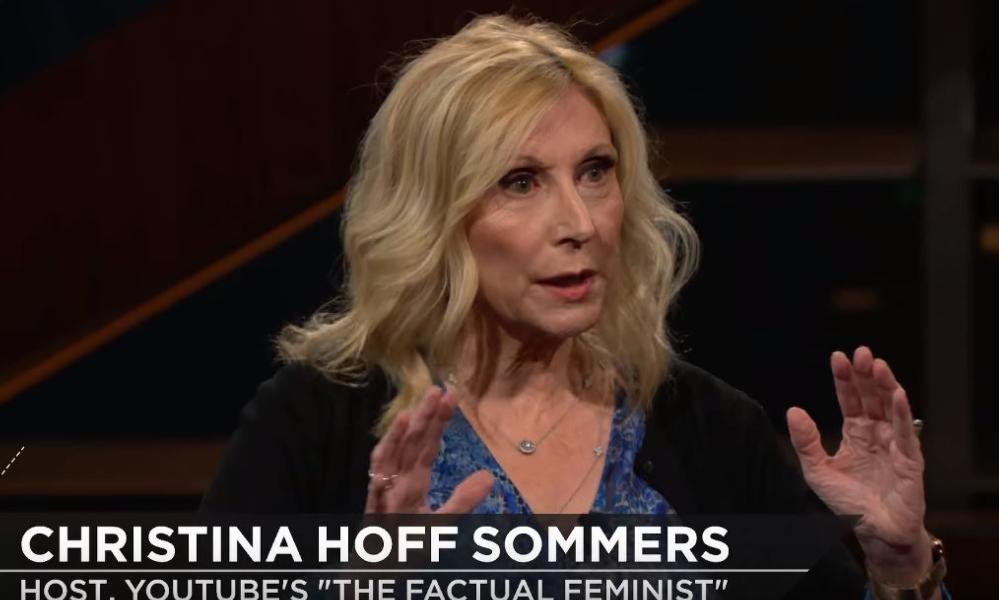 Hoff Sommers, who said she identifies as a Democrat, specifically called out college faculty and students who feel "triggered" by certain statements and actions. She recalled students setting up "safe rooms" at colleges where she has given lectures and, at Oberlin College, even had to have a police detail for her own personal security. Hoff Sommers pinned this "snowflake" atmosphere, as it has been called by both conservatives and liberals, including Maher, on not just students, but also professors.

"There are these professors and they pass along these messages that [women are] all traumatized, we're all fragile, we're diminished under this patriarchal oppressive system," Hoff Sommers said, while adding that "this is madness."

"American women, arguably, are among the freest, most self-determining in history," she continued. "And at the very moment where we have this opportunity for just profound equality with men, and to take on running of the world with men, at that very moment we start giving, especially undergraduate women at the more elite colleges, we start giving them the message that they're victims, they're fragile, they need not equality with men but protection from these toxic masculine hegemons."

Relevant portion begins around the 4:40 mark

Hoff Sommers has been an outspoken critic not just on modern-day "feminism," but also political correctness. She specifically cited an increasingly common "microaggression" on college campuses: using the phrase "you guys."

Campus Reform has frequently reported on feminist and political correctness controversies at colleges across the country.

For example, Campus Reform reported on a study finding a more disproportionate number of female-only scholarships than male-only scholarships. University of Michigan Professor Mark Perry commented on the study to Campus Reform: “That’s a remarkable story of female academic success in higher education that should be recognized, acknowledged and celebrated. But the other story is one of men falling behind in higher education, and becoming the ‘second sex.’”

Hoff Sommers said Friday during her interview with Maher, "Feminism is supposed to be about equality between the sexes, mutuality, friendship, civility, yet it's captive to a small group of very intense eccentrics who think men are the enemy and that the --- look, the goal of feminism was to overcome male chauvinism...but the answer is not female chauvinism."