EXCLUSIVE VIDEO: Leftist protester at Sean Spicer event tries to 'shut it down.' Police shut him down instead. 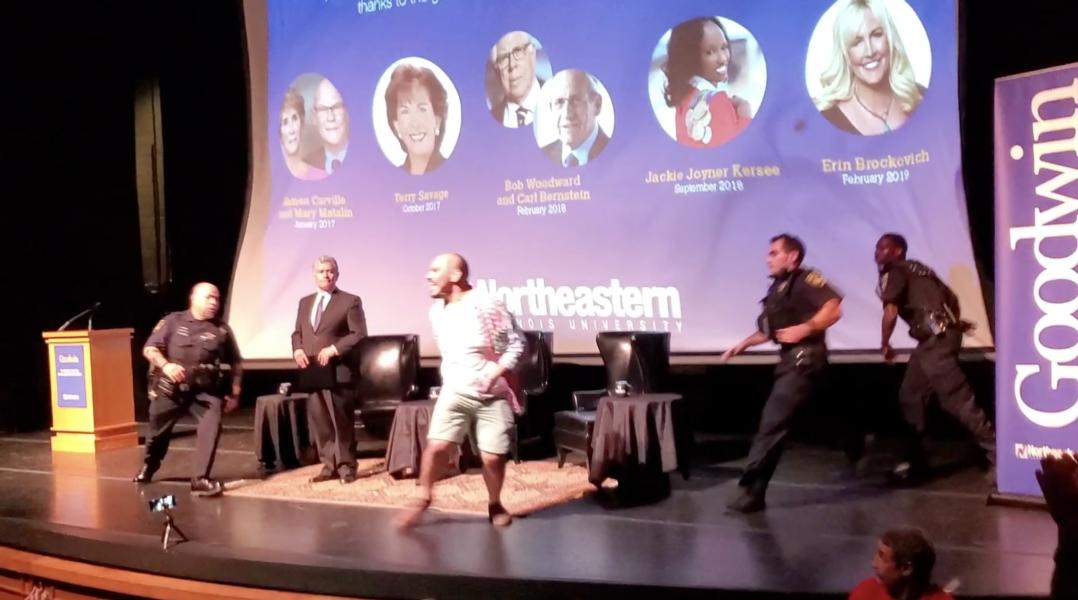 Protests occurred both before and during the event, which centered on the 2016 presidential election and the upcoming 2020 election. As Campus Reform previously reported,  multiple NEIU faculty members and students signed an open letter to the NEIU, president calling on her to cancel Spicer's appearance at the college.

In addition to labeling the policies of the Trump "regime" as "fascist," the letter stated, "we are appalled that former White House Press Secretary Sean Spicer has been invited to speak at Northeastern Illinois University," calling Spicer's mere presence "an insult to all NEIU students and employees who are members of groups targeted with violence and vitriol by the Trump administration....It would be an affront to humanity to host Spicer at NEIU. We urge you to withdraw the invitation immediately."

Despite the backlash, however, the event went on as planned, but with a few disruptions.

Moments after the event moderator walked out onto the stage, even before Spicer and Brazile had been introduced, a man from the audience rushed the stage and shouted what sounded like "shut it down." He was promptly apprehended by four police officers as he continued to shout mostly unintelligible phrases. However, just before police removed him from the stage, he shouted what sounded like "...f*cking Nazis."

Moments after Spicer walked out on stage, someone is heard shouting "Spicer, you f*cking scumbag, kill yourself" and "you piece of shit!"

Roughly five minutes into the event, chants from protesters outside the room grew louder, which the moderator called "a sign of health...where people can be yelling in protest and at the same time we have the ability to have a robust but civil conversation."

The identity of the man whom police removed from the event is unclear and the NEIU Police Department did not respond to Campus Reform in time for publication.

In addition to the open letter, signed by dozens of faculty members and students, one NEIU professor, Brett Stockdill, along with at least one other student, started a Facebook event, titled "Rally to Stop Sean Spicer at NEIU."

Rebekah Monroe, who identified herself to Campus Reform as a student and is listed as one of the event's "hosts," said Friday, "I was one of [the] organizers but I didn’t start it. However, I will encourage it."

"Normalizing bigotry and everything Trump represents (hate of marginalized people: people of color, Muslims, Jewish, LGBTQIA, undocumented, immigrants, women, disabled, the list goes on...)," Monroe said. "He is hateful and only cares about money. Sean Spicer helped get him elected and keep him in power and gaslight human rights violations. We do not want people to think that NEIU welcomes such people and gives them a platform to help boost and normalize their image. We want a President of our University that protects our students, not gives in to donors' opinions over the school community feeling safe."

NEIU has not responded to a request for comment from Campus Reform.