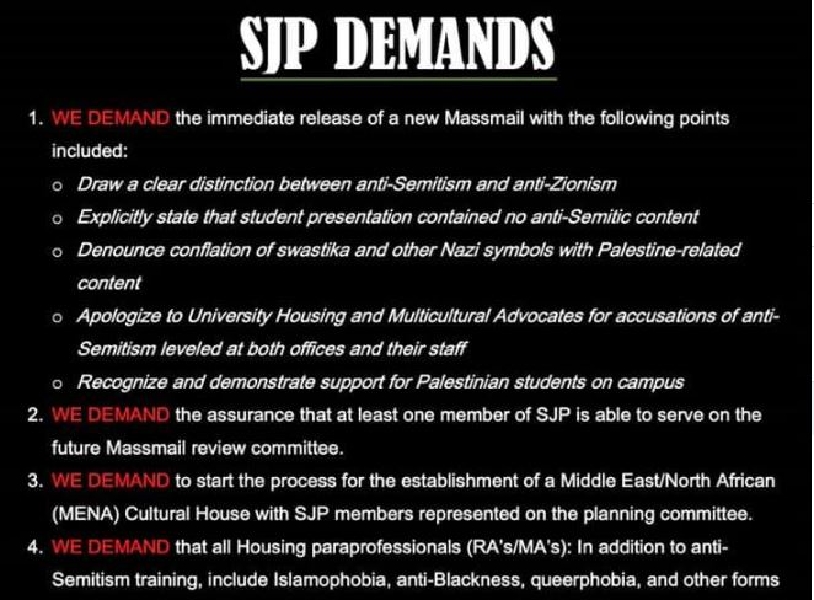 Students for Justice in Palestine (SJP) at the University of Illinois at Urbana-Champaign (UIUC) sent out a list of demands in October after meeting with various chancellors in response to a mass email from the school suggesting that an SJP presentation was anti-Semitic.

“Concerns were raised about a recent presentation with anti-Semitic content at a staff development program by a Housing student-worker,” reads the email from UIUC Chancellor Robert Jones, obtained by Campus Reform. Jones was referencing a presentation given to a full-time staff member and 11 other student-employees.

“Failure to comply...will result in students’ demand for the resignation of Chancellor Robert Jones"

After describing this and a swastika allegedly found in a campus building, the chancellor announced that full-time housing staff, multicultural advocates, and resident advisors would be required to complete anti-Semitism training.

[RELATED: Bill aimed at banning anti-Semitism in public schools gets some hefty pushback]

In response, the SJP released a list of demands, calling for, among other items, a new mass email making a distinction between anti-Zionism and anti-Semitism, a clarification in the email that the referenced student presentation did not feature anti-Semitism, the hiring of additional Palestinian faculty, and the requirement for housing personnel to be educated on “Islamophobia, anti-Blackness, queerphobia, and other forms of racism/bias.”

SJP asked the university to denounce a perceived link between Nazi symbols with Palestinian-related content.

According to SJP, “failure to comply with the demands above will result in students’ demand for the resignation of Chancellor Robert Jones from his office.”

The presentation, according to The Jewish Journal, mentions the Great March and promotes “martyrdom” stating that it is “death which is desired by a warrior, selected with all the awareness, logic, reasoning, intelligence, understanding, consciousness, and alertness that a human being has.”

Obtained by Campus Reform, the presentation also differentiates between anti-Semitism and anti-Zionism, terming the former animus “the system of ideas passed down through a society's institutions to enable the scapegoating, oppression, or stereotyping of Jews; the ideological and/or physical targeting and persecution of Jews that results from that” and the latter ideology “a political stance which opposes one's self to the state of Israel, either as it currently operates or on mere principle. This stance lends itself to a criticism of the state of Israel, its founding, and its current practices.”

The demands are co-sponsored by various campus groups, including Graduate Employees' Organization at UIUC (a union representing graduate employees at the University of Illinois at Urbana-Champaign), Young Democratic Socialists of America, Fossil Free UIUC, and Students Against Sexual Assault.

“It is entirely inappropriate for anyone other than the Jewish community to define anti-Semitism,” Erez Cohen, executive director of Illini Hillel, told Campus Reform. “Anti-Semitism is hatred of Jews - for our race, for our religion, and for our state, Israel. Hillel continues to stand proudly with the Jewish students against the rising tide of anti-Semitism.”

The University of Illinois at Urbana-Champaign did not respond to a request for comment.