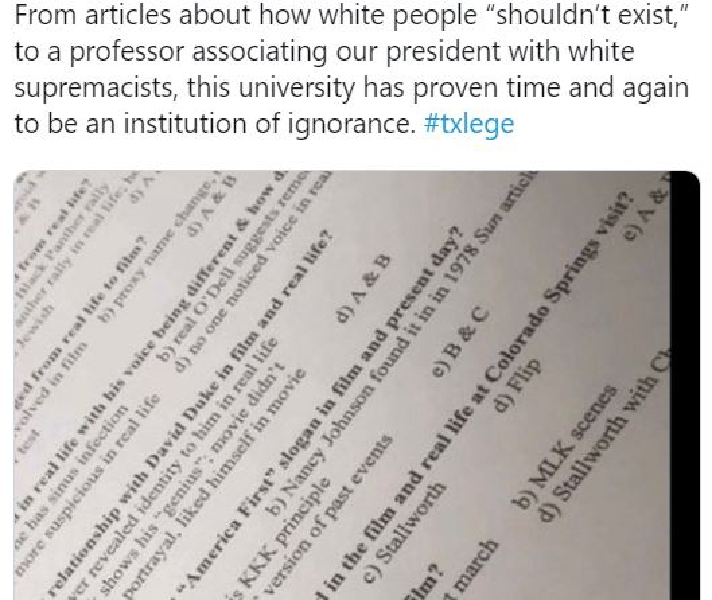 A professor at Texas State University gave a quiz in film class asking students whether President Donald Trump’s "America First" platform is comparable to white supremacy and the KKK.

According to the student publication at Texas State, The University Star, English professor Rebecca Bell-Metereau asked students in an Introduction to Film course, “What is true about the ‘America First’ slogan in the film and present day?”

In a statement to Campus Reform, Bell-Metereau confirms that “President Trump['s] slogan is KKK principle” is a possible answer.

The question is in response to the movie "BlacKkKlansmen," directed by Spike Lee, which recounts a true story about a detective in Colorado whose mission is to go undercover and expose the Ku Klux Klan.

In a statement to The University Star, Metereau said, “This quiz is simply based on the information from PolitiFact to see if they could read an article and understand what it is saying. All I want them to do [is] be able to use fact-checking sources to determine for themselves what is true and what is not true in a film that is a biopic.”

Texas College Republicans, the state-wide collegiate organization for the Republican Party of Texas, tweeted an image of the quiz, which conservative organizations, including Students for Trump, subsequently picked up.

This is completely unacceptable behavior by a professor from @txst

From articles about how white people “shouldn’t exist,” to a professor associating our president with white supremacists, this university has proven time and again to be an institution of ignorance. #txlege pic.twitter.com/xw926Q8Qcw

The Texas College Republicans also released a recording via Twitter in which a student asks Metereau about an image at the end of the film "BlacKkKlansmen" that showed both Trump and KKK Grand Wizard David Duke. According to the tweet, Metereau responded, “there was never any distancing from white power,” in reference to the Unite the Right rally in Charlottesville in 2017.

Students in Anti-Trump Professor Rebecca Bell-Metereau’s class at @TXST made this recording of the Professor claiming:

In a statement to Campus Reform, Bell-Metereau claims that the audio, “...was recorded without my permission, which violates copyright, since my lectures are my intellectual property.”

Bell-Metereau added, “it is my voice and I made the omment about Stephen Miller that his online materials include a number of white nationalist and white supremacist posts. Given that Miller is a senior White House advisor to the president, I commented that this is a problem for our nation.”

Since then, Trump has condemned racism, saying “those who cause violence in its name are criminals and thugs, including the KKK, neo-Nazis, white supremacists, and other hate groups that are repugnant to everything we hold dear as Americans.”

In defense, Metereau claimed that she does not share her personal opinions in the classroom and that all her criticisms are based in fact.

In another statement to The University Press, President of College Republicans Brett Bailey says that students want a learning environment that is unbiased, adding that some professors attempt to influence students to a certain way of thinking.

In response the series of tweets by the Texas College Republicans, the College of Liberal Arts at Texas State responded via Twitter: “The question is related to material covered in a course that examines a variety of current films. @TXST strongly affirms a community free of bias, prejudice and racism.”

The question is related to material covered in a course that examines a variety of current films. @TXST strongly affirms a community free of bias, prejudice and racism. #txst

Rebecca Bell-Metereau is a former Democrat candidate for the Texas House of Representatives and a current professor of film and English at Texas State. She has written several books, including Transgender Cinema.

The Dean of Students at Texas State and Texas College Republicans did not respond to Campus Reform’s request for comment in time of publication.