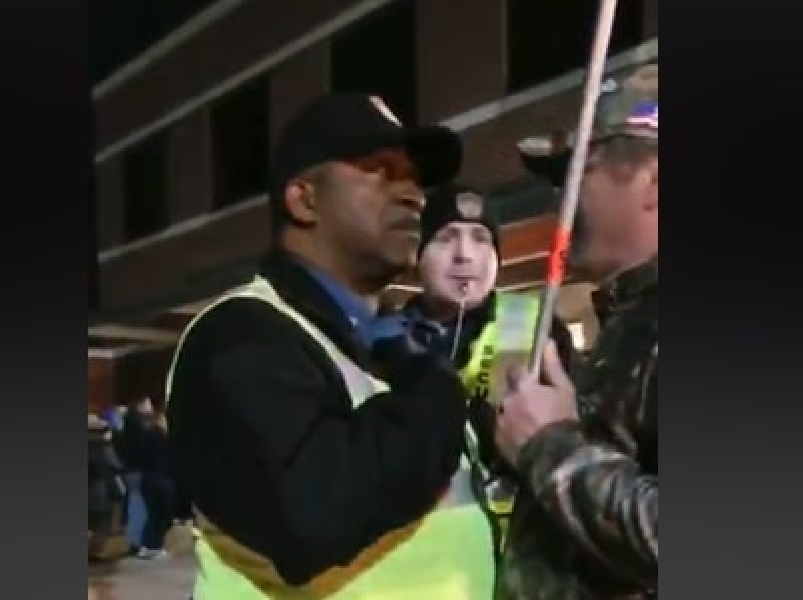 New video from outside a Bernie Sanders rally at Virginia Wesleyan University paints a clearer picture of what happened before and after a security officer tackled a Donald Trump supporter to the ground.

As Campus Reform reported earlier Monday, Markus Gohring, the man carrying a Trump flag in the now-viral video, was wrestled to the ground after being confronted by security officers threatening to call the police and have him arrested if he did not leave.

One of the security officers shouts at Gohring multiple times, saying, "Leave! I'm not gonna tell you again." At another point, an officer says "You are not following my instructions" and "nobody gotta tell me to tell you to leave." The officer then tells Gohring, "You're on my property. This is private property."

While VWU is a private university, the college advertised the Sanders rally on its website as "open to the public."

Shortly after that exchange, Gohring appears to walk away from the building into which the line of people is waiting to enter and security officers follow as he makes an exit. About halfway through the parking lot, an altercation breaks out when the security officer grabs Gohring's Trump flag and wrestles him to the ground. Gohring maintains that he did not exercise any violence leading up to the altercation, and the video does not show him making any physically violent moves against the officer.

[RELATED: Trump supporter: I was 'tackled to the ground' at Bernie Sanders rally at Va. college]

“I’m not an aggressive person,” Gohring told WAVY-TV in Virginia Beach. As for what happened right before the officer grabbed the flag and wrestled him, Gohring told the outlet, “he approached me then from behind and the rest is [on] video."

"I saw he was pulling a weapon and that’s when I ran,” Gohring added, referring to the moment when the officer pulls out his baton. "I saw that getting up, and that's when I actually ran for my life," he told his attorney, Tim Anderson, in a Facebook Live video posted Monday.

"He's walking behind you and he kind of puts his hand on your back and is like, 'hurry up, hurry up,' right? You kind of flip around and say 'don't touch me,' right? And that's when you got taken to the ground," Anderson says to Gohring regarding the seconds leading up to the altercation.

In a statement to WAVY-TV, VWU spokeswoman Stephanie Smolgo described Gohring as "disruptive."

"A video circulating on social media shows a security officer engaged in an altercation with a disruptive attendee in the parking lot prior to the rally. Unfortunately, the video does not depict the preceding actions of the individual that necessitated the officer to take action. Virginia Wesleyan University holds freedom of speech and open dialogue at the deepest core of its values. However, when the conversation turns to physical violence and becomes a threat to public safety, it will not be tolerated on our campus," Smolgo added.