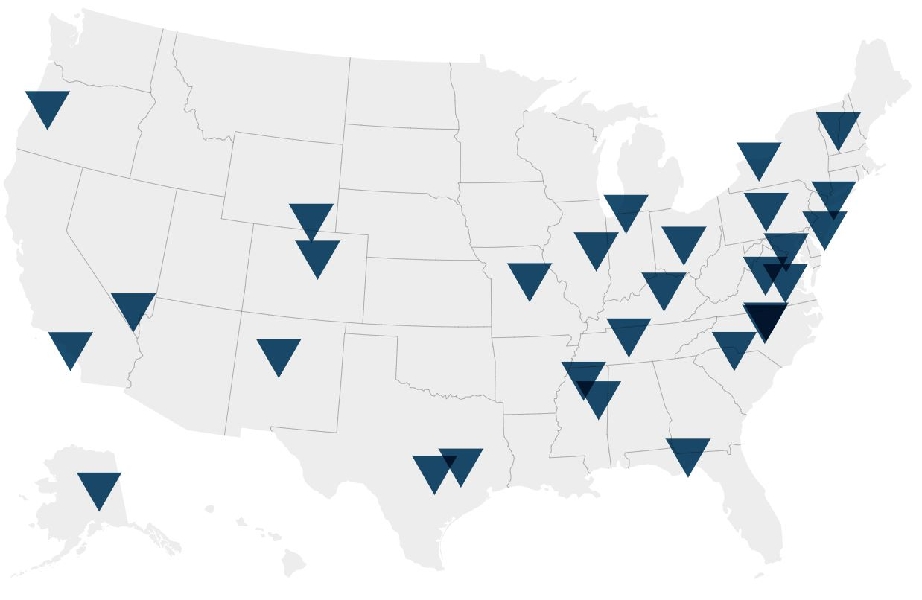 Across America, historical monuments, murals, and buildings named for historical figures are being torn down and renamed amid controversy stemming from police-involved killings, most notably the death of George Floyd in Minneapolis.

While violent protesters in several major cities have taken to the streets in recent weeks to deface or destroy these landmarks, college campuses have been the sight of these types of crimes for years. In other cases, colleges have acted peacefully to remove historical symbols. In some other instances, students and faculty have called to remove these symbols of history.

As Campus Reform has reported, schools from New England to Alaska have fallen victim to this political correctness.

Campus Reform did a deep dive into past stories and identified more than two dozen such instances just since 2015. The interactive map below pinpoints each of the campus locations. Hover over each marker to identify the university name. For more information on the controversy at each school, scroll down the page to the number that corresponds with the name of the school.

Dartmouth College announced the removal of the weather vane atop its most iconic campus building after racism complaints.

The University of Rochester announced plans to remove its founder's name from campus spaces. The founder, George Hoyt Whipple, was an American scientist who won a Nobel Prize in 1934.

Hofstra University students vandalized a statue of Thomas Jefferson amid campus talks to remove the monument. Opponents of the statue wanted it taken down because Jefferson, one of the nation's founding fathers, owned slaves.

Stockton University in New Jersey removed a bust of Richard Stockton, a Revolutionary War patriot and the man for which the university is named, because he owned slaves.

The Community College of Pennsylvania ditched its "Phil the Colonial" mascot after students were offended. They opted for "Roary the Lion" instead.

Like the Community College of Pennsylvania, students at George Washington University voted to "remove and replace" its "George the Colonial" mascot, named for George Washington. The Washington, D.C. college also renamed its Colonial Student Services Center to "Student Financial and Registration Services."

A statue of confederate leader Williams Carter Wickham, located near the entrance to Virginia Commonwealth University, was vandalized amid nationwide protests of police-involved killings.

The University of Virginia changed its newly unveiled athletic logo after some pointed out that some of the imagery used in the logo had ties to slavery. The move follows past calls to remove statues of both Thomas Jefferson, the university's founder, and George Rogers Clark, who helped pave the way for the Lewis and Clark Expedition.

A statue at Duke University that resembled the former confederate army Gen. Robert E. Lee was vandalized in 2017.

Students at UNC-Chapel Hill toppled a confederate statue, referred to as "Silent Sam." One protester called the statue itself "the genocide of black people."

South Carolina's York Technical College banned the confederate flag from a confederate history event after initially trying to cancel it.

A committee at FSU recommended the removal of a statue of Francis Eppes, the grandson of Thomas Jefferson. Eppes is also believed to one of the founders of the university. The statue was quietly removed months later.

Columbus State Community College in Ohio is considering the removal of a statue of Christopher Columbus, WSYX-TV reported.

The University of Kentucky announced its intent to remove a mural located in the school's Memorial Hall, which depicts enslaved Africans and Native Americans, WLEX-TV reported.

Vanderbilt University announced in 2016 that it would spend $1 million to remove the name "Confederate" from a dormitory named "Confederate Memorial Hall."

The University of Notre Dame announced in 2019 its plans to remove a mural of Christopher Columbus over his treatment of Native Americans.

A commission at the University of Illinois recommended in 2019 the retirement of its mascot, Chief Illiniwek.

Mississippi State University removed the Mississippi state flag from most campus locations because it includes the confederate flag.

A confederate statue at the University of Mississippi was vandalized in June amid nationwide protests of police-involved killings.

Students at the University of Missouri called for the removal of a statue of Thomas Jefferson because the former president was a "racist slave owner."

A confederate statue at Texas A&M University was vandalized amid nationwide protests. The statue portrays the Texas A&M founder, who was also a confederate leader.

The University of Texas-Austin removed a statue of Jefferson Davis, the president of the former confederacy, in 2015.

The University of Denver stopped issuing student ID cards with the phrase "Pioneer Card" after renaming a number of other campus staples with the Pioneer moniker.

Students at UNM launched an online petition calling for the removal of a "racist" mural in the library.

The University of Nevada-Las Vegas announced the removal of the statue of its "Rebel" mascot.

The Pioneer Mother and Pioneer Father statues at the University of Oregon and the president of the school later announced they would not be replaced as historical monuments nationwide were vandalized and removed following protests over recent police-involved killings.

California State University-Long Beach announced in 2018 plans to retire its "Prospector Pete" mascot after some complained it was offensive.

The University of Alaska-Fairbanks removed the Mississippi state flag from the campus' "Circle of Flags" because it contains the confederate flag. The flag was later restored but the schools president said he did so "reluctantly."