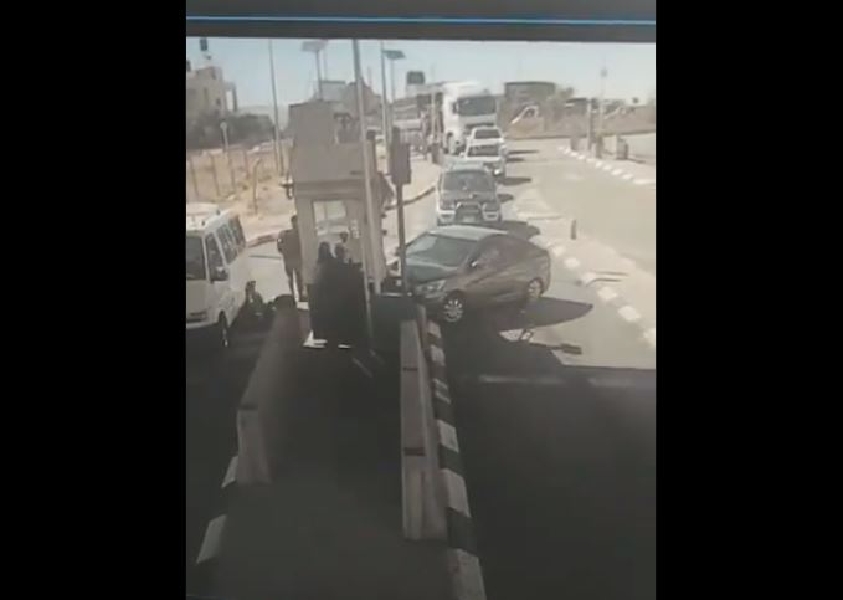 The Israeli Border Police released a video in which Ahmed Erekat, the professor’s cousin, drove his car into a group of Israeli Border Patrol officers in the West Bank. Upon approaching a checkpoint booth, the vehicle Erekat was driving abruptly sped up and rammed into a group of officers, just before the car came to a sudden stop and Erekat stepped out of the car.

Footage released by Israeli authorities shows a blurred version of what happened next.

"the car looks like from the video that it lost control"

An Israeli police spokesman described the incident as a "terrorist vehicle attack."

Unedited footage shared by Erakat shows the man getting out of the car, unblurred.

As the Times of Israel reported, the border patrol officer who was injured told Channel 13, “I signaled to him to halt, the car started to slow down, and I moved in his direction.” She said, “he saw that I took a step, he looked me in the eye, turned the steering wheel and rammed into me, and I flew to the other side.” She claimed that it was “only when I went flying, I understood that this was an attack.”

Erakat said in the podcast that "the car looks like from the video that it lost control."  Her cousin is reported as saying in a second video that emerged since the incident, “Your bro’s no snitch. I never betrayed the homeland," reportedly addressing rumors that he collaborated with Israeli security forces. While some reports indicated that Erekat recorded the video moments before the incident, his family says it was recorded months ago.

In a request for comment, Ekarat provided Campus Reform with an article she wrote in Just Security about the incident. Erekat writes that Kadosh had minor injuries and "jumps back onto her feet in time to witness her fellow soldier shoot multiple rounds of live ammunition into Ahmad’s unarmed body."

In her account of the events, Erakat criticized the Israeli officers and wrote that her cousin was "seemingly terrified by the accident" and had "attempted to get out of the car and to raise his arms above his head."

She further stated that her cousin "crumbled onto the asphalt where he writhed in pain and bled out for over an hour."

Rutgers University did not respond to Campus Reform's request for comment.