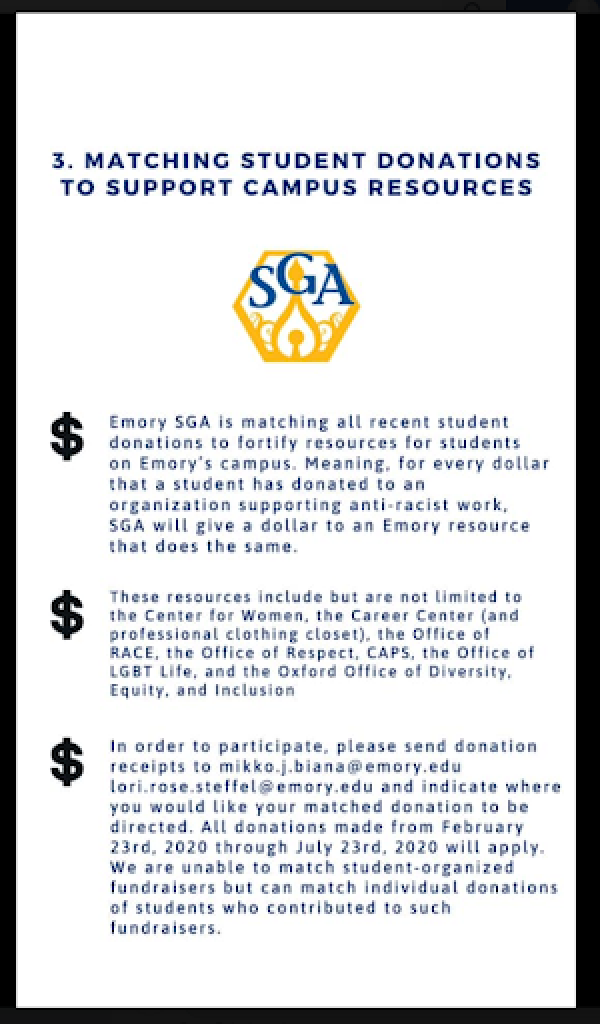 The Emory University Student Government Association (SGA) recently announced in an email intended to “share some updates on the initiatives SGA launched in response to anti-Black violence and incidences of white supremacy” that it would match over $10,000 in student donations to organizations that “are committed to dismantling systemic anti-Blackness and oppression.”

The email also included an offer from SGA to buy and ship books from the “Emory Antiracist Reading List” to students free of charge.

“Power abuse is not acceptable."

The initiatives were first announced in late June and since then Emory’s student government has received more than $10,000 in donations from students and the antiracist reading list has been updated with faculty recommendations.

In order to match individual student donations, SGA plans to give an equivalent donation “on behalf of the student to any Emory office of their choosing that supports historically underrepresented groups.” It lists entities like the Office of LGBT Life, the Center for Women, and the Office of Diversity, Equity and Inclusion as examples of offices to which the group will match donations.

SGA began accepting receipts on June 21 and ceased doing so on July 29.

The description of Emory’s antiracist reading list reads, in part “Showing up for protests, donating, signing petitions, and reflecting on other tangible ways that we can combat anti-Blackness and systemic racism is necessary work, but we are firm believers that knowledge is power,” and includes a number of works that its curators  say should serve as a “foundation for crucial dialogues that must take place within our homes and larger communities as we continue to dismantle oppressive structures and institutions.”

Books on this list include titles such as White Rage, Christian Slavery, and Are Prisons Obsolete? by Angela Davis, an activist and University of California-Santa Cruz Distinguished Professor Emerita with ties to the Communist Party USA.

The vast majority of SGA’s funding comes from a “Student Activity Fee” that all students must pay into.

When asked about the usage of the student provided funds in their initiatives and if they understand the concerns of students who may take issue with offices or media they don’t necessarily have a positive opinion of receiving SAF funds, the Emory Student Government Association declined a request for comment.

There are some in Emory’s community that strongly oppose, and even question the legitimacy of the recent measures undertaken by the Student Government Association.

A student enrolled at Emory University, who has requested to remain anonymous for fear of campus backlash, told Campus Reform that while there is likely widespread support for racial justice on campus “SGA’s decision to match $10,000 in donations to organizations committed to 'dismantling anti-blackness racism' was both irresponsible and illegal.”

The student alleged that “the SGA governs its finances through the Finance Code of the SGA,” and according to these “rule[s], the entire SGA is funded by student activity fee” which the student pointed out was recently increased.

The student went on to allege that policy clearly “lays out rules for charity, but it does not have any regulations governing SGA’s role to ‘match donations’ for any organization,” adding "in fact, SGA can only help fundraise for certain activities or causes and simply be responsible for transferring such funds to the charities.“

The student claims that to have made such a decision, SGA would “undoubtedly” have to have neglected to refer to its own financial code, adding that “no student legislative body has agreed to it, nor [have] students been informed about the process of decision-making and allocation of funds.” The student called the move an “abuse of SGA power.”

The Emory SGA has a history of violating its finance code and mismanaging its budget.

The student highlighted this history, citing an incident in 2019 when SGA overspent its budget by $28,000.

The student said such mistakes “cost students, especially low-income students, a significant amount of financial stress and resources” and went on to call SGA’s response to such issues “irresponsible” and “repulsive.”  He then asked, “why should students continue to trust this organization, which [is] supposed to serve the entire student body, to allocate our money arbitrarily?”

“Power abuse is not acceptable,” said the student, adding “I do not want to see another big headline of its overspending of our [Student Activities Fee] while our college experience has not been improved.”

Robert Schmad is a Georgia Campus Correspondent with Campus Reform. He is a sophomore at Emory University, double majoring in Finance and Political Science. He is affiliated with the Emory College Republicans and International Relations Association.