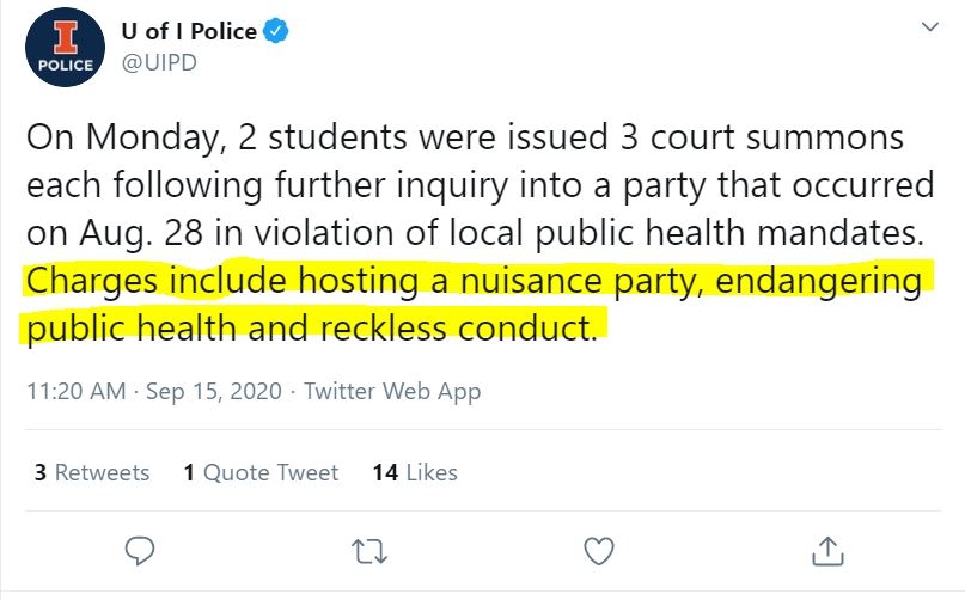 The University of Illinois Police Department said that at least two students have been charged after violating the school's social distancing guidelines.

On Tuesday, the UIPD tweeted, "On Monday, 2 students were issued 3 court summons each following further inquiry into a party that occurred on Aug. 28 in violation of local public health mandates. Charges include hosting a nuisance party, endangering public health and reckless conduct."

"On Monday, 2 students were issued 3 court summons each following further inquiry into a party that occurred..."

[RELATED: A Michigan student was arrested and charged for posting this photo]

On Monday, 2 students were issued 3 court summons each following further inquiry into a party that occurred on Aug. 28 in violation of local public health mandates. Charges include hosting a nuisance party, endangering public health and reckless conduct.

University of Wisconsin Milwaukee (UWM), Ohio State University (OSU), and Purdue University are also cracking down on students who don't abide by their guidelines of wearing masks and maintaining social distance, even while they are off-campus.

UW-Madison's campus police is breaking up gatherings that could potentially lead to a large crowd both on and off-campus.

Campus Reform asked Chief LeMire if the department reports those students who aren’t practicing social distancing to the university. He stated, “Those cases where students ignore safety protocols, the students responsible for the property will be referred to the Dean of Students.”

“Yes, which is why the education effort is so important," the chief replied.

Dean of Students Adam Jussel stated, “…they’re being let know that’s there’s processes to hold them accountable if they violate those standards.” LeMire also mentioned that police broke up a social gathering even though the students were handing out face masks at the door stating, “That’s a nice effort but not really what we’re looking for. We don’t want the party in the first place."

Campus Reform also reached out to Jussel for a comment on the story but did not receive a response.

Ohio State University began monitoring and suspending students before the semester started. Even though classes didn’t start until August 20, from August 19 – August 23, OSU suspended 225 students for participating in off-campus gatherings. More than half of the students didn’t attend any of the off-campus gatherings they were accused of and had to prove they weren’t in attendance before the university lifted the suspension.

Campus Reform reached out to OSU Chief of Staff Katie Hall for a comment on the story but did not receive a response.

Purdue University suspended 36 students for attending large social gatherings five days before the semester started. Associate Vice-Provost and Dean of Students Katie Sermersheim said that according to the Purdue University Police Department, no one was practicing social distancing or wearing masks.

“It's very disappointing and discouraging that we haven't even officially launched the semester and we've had a social function that violates our 'Protect Purdue' policies and plans," Sermersheim stated.

The University has a “Protect Purdue Pledge” which students are required to abide by.

“…if you don’t abide by rules, there is no place for you here,” Sermersheim stated regarding those who violate the pledge.

Campus Reform reached out to Purdue University for a comment on this story but did not receive a response.