EXCLUSIVE: Prof promises to kick students out of class for ‘misgendering’ other students 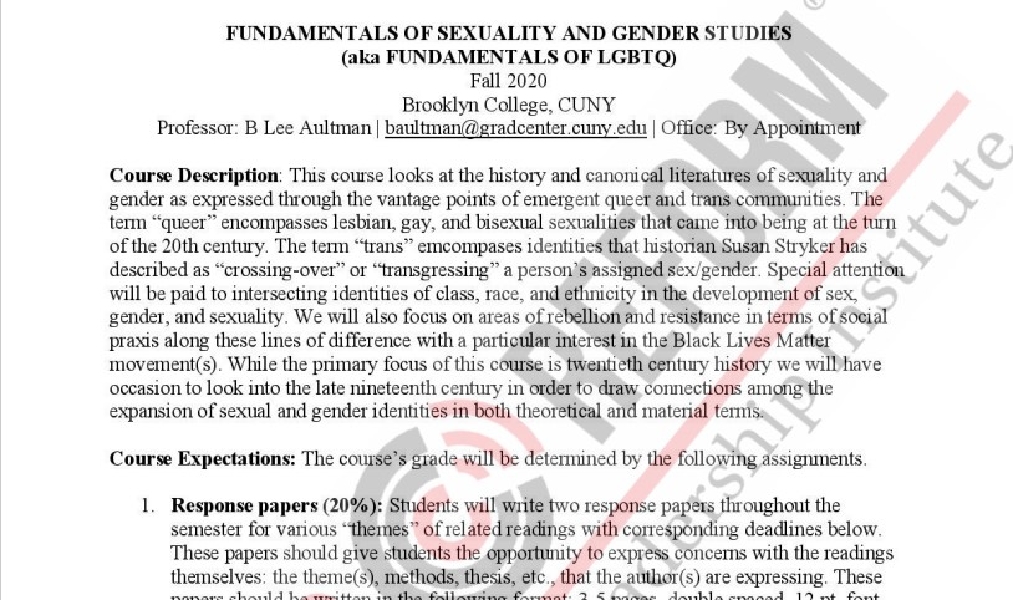 A professor at Brooklyn College promised to kick students out of class for “misgendering” other students.

After Campus Reform contacted the university, the professor was told to amend the policy.

Brandon Aultman, who teaches LGBT politics at the university, wrote a clause in the course syllabus for “Fundamental Concepts in LGBTQ Studies” that threatens to remove any student from class if he or she engages in “intentional misgendering.”

The full original syllabus was obtained exclusively by Campus Reform and reads, in part, as follows:

Pronouns, Gender Identity, and Racial Insensitivity: My name is B. Call me B. I am nonbinary, transfeminine. For my information concerning the use of these terms please consult http://transstudent.org. I use gender-neutral pronouns (they/them). I adhere to a strict policy of respect for the gender, sexual, and racial identities of my students. Intentional misgendering, as with any attempt to slur another student’s personal integrity on the basis of race, ethnicity, or religion, will result in immediate dismissal from class for that session. Continued abuses will result in disciplinary action with the appropriate administrators.

However, “disturbing communication” only merits reaching out to the student and the department chair.

After Campus Reform contacted Brooklyn College, Media Relations Manager Rich Pietras stated that they were “not aware of this classroom guideline.” Because the school “believes that all classroom guidelines should be crafted to support learning,” they asked the professor “to not dismiss students from the session, but rather to consider a range of effective pedagogies instead and to use the college policy with regard to gender discrimination.”

Another professor at Brooklyn College, who sent the syllabus on behalf of the student and requested to remain anonymous, noted the lack of due process and threat to students’ First Amendment rights.

“This is a particularly aggressive abuse of what is clearly a trend towards enforcing speech codes on students and faculty,” the professor said.

A student who dropped the class after reading the misgendering clause told Campus Reform that “failing to refer to someone by their preferred pronoun should not result in the immediate dismissal from class.”

“It is unreasonable to expect everyone to be accepting of the new standards of proper or acceptable behavior that the twenty-first century has made way for with its fast-changing dynamic,” the student explained. “[The professor] has asked his students to address him by the letter ‘B’ in addition to using the pronouns ‘they/them’ when making mention of him. It is one thing to ask to be referred to as a member of the opposite sex, but another thing to ask to be referred to in the third person.”

The student noted that the syllabus uses “academic discipline as a means of ensuring his own comfort.”

The course syllabus asks students to complete several LGBTQ-related reading assignments, including such titles as “Is the Rectum a Grave?" and another called “How to Bring Your Kids Up Gay.”